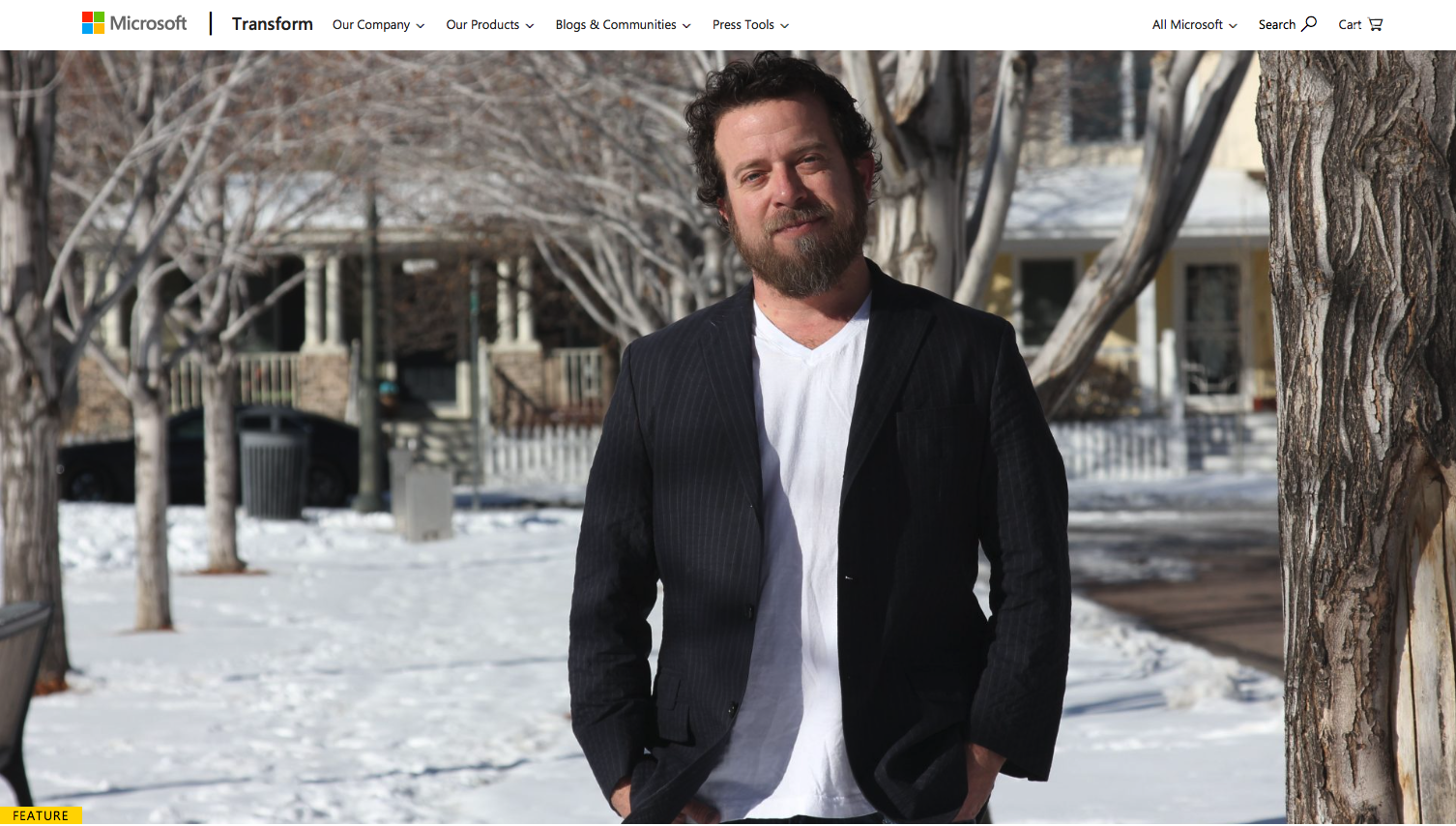 His detour into darkness began with a racing heart in middle of the night.

Jeff Dorchester, a physically active entrepreneur in his early 40s, awoke in his Colorado bed two years ago to the terrifying sensation of atrial fibrillation ? his heart?s upper chamber was beating 400 times per minute. Doctors would need to shock his heart back into normal rhythm.

Neither the cause nor the fix were immediately clear. What came next, though,?only deepened his danger. Dorchester slipped into clinical depression, a first-time experience common to cardiac patients.

Fearing what others might think, he barely told a soul. His silence held for months, until Dorchester confided to a close friend, Dion Gonzales, that he had been struggling ? but also had an idea that might help more folks open up, possibly saving lives.

What Dorchester heard in return floored him: Gonzales was, himself, quietly reeling from a recent suicide attempt by a family member. Each man had kept their own staggering crisis hidden from one another and the world.

?You end up being isolated. And it?s scary,? Dorchester says. ?That day, we collectively agreed it was time to take a stand and fight for this cause.?

The pair recently launched iRel8, a chat app that connects users anonymously to others who share similar experiences with anxiety, addiction, depression and dozens of other conditions.

They aim to help smash barriers to mental wellness by offering users a safe, affordable support group that?s global and always available ? as well as a chance for others to mentor folks seeking answers.

Ultimately, the co-founders seek to stop the stigma that so often mutes or muffles crucial conversations around mental health.

?As we began to share the stories of what we were building, we found it amazing that everybody has a story but very few people talk about it,? says Gonzales, 47, a tech entrepreneur and executive also based in Colorado.

Globally, hundreds of millions of people live with depression as well as with anxiety disorders, addictions or other conditions, reports the World Health Organization.

?When you consider all the people who won?t seek help or who aren?t willing to talk about it, imagine how many could have a new avenue to begin healing,? Dorchester adds. ?It?s mindboggling.?

For Dorchester, 43, the abrupt arrival of severe depression was equally stunning.

?I didn?t know what that was. It?s sort of like you become a different person,? Dorchester says.

So Dorchester began to unload private thoughts to anonymous people who frequented his favorite online chats for gamers and car buffs. It felt safe. Nobody judged him. And many people on the sites openly related to his experience because they, too, lived with depression, he says.

As Dorchester found room to breathe, he gained the footing to become one of those helpful, credible voices.

Last October, an online friend in a car chat revealed to Dorchester that he was planning to commit suicide that night.

?I?m like, ?Stop! Stop!? And next, I was talking to him on a direct messaging app. An hour into that, he was like, ?Dude, you just saved my life. You just talked me down.??

?For the next few weeks, every other night, I?d check in with him. We had similarities. I have depression,? Dorchester says. ?That?s when I started noodling this concept.? He was like, ?Dude, you just saved my life. You just talked me down.?

Soon, he decided to share everything, including the app idea, with Gonzales, his friend and tech collaborator since 2010. That?s when he learned that Gonzales and his family had been working through a suicide attempt by a family member.

?The timing was impeccable,? Gonzales recalls. ?I had no idea Jeff was going through that. But like Jeff, we also had tried professional counseling, which we found very clinical, not relatable. We didn?t connect with the therapist on a personal level.?

They both immediately seized on the same word. It was what Dorchester had found in the people on his chats and what Gonzales was hoping to find in the professionals: relatability. As their app moved from concept to software, ?I relate? became ?iRel8.?

Both men say they ? and their families ? are in a better place. Now, they hope others can reach healthier ground.

iRel8 features dozens of open, individual ?rooms? under categories that allow users to find others who can quickly empathize and offer guidance, the co-creators say. For example, within the anxieties group, users can visit sub-rooms for panic disorders, social anxieties, phobias and health-related anxieties (like Dorchester?s). Under PTSD, users can find sub-rooms catering to combat veterans or people who have experienced trauma or loss in the civilian world.

?What we?re really going for is that one-to-one, peer-to-peer connection,? Dorchester says. In time, they intend to make a network of mental health professionals available through the app.

The app is available now in the App Store for Apple devices and Google Play for Android. During a 90-day promotional period, the app can be purchased for $3.99. After that, users will pay a $1-per-month subscription.

While collaborating on iRel8, they used Microsoft Office 365 to swap platform concepts, business ideas and personal inspirations, each working from their respective home offices in the Denver area. To build the app, Dorchester relied on code from Visual Studio.

With the app available to anyone around the world possessing a smart phone, the co-creators plan to incorporate Microsoft Translator to break language barriers and fuel growth to reach a critical mass where people are talking 24/7 in every room.

?We?d like each room to have 10, 15 or maybe 100 contributors,? Gonzales says. ?We?re looking for 3,000 to 5,000 users to have a sustainable product with people always online to relate. That?s obviously scratching the surface. I would like to have millions globally.?

During the app?s build, Gonzales and Dorchester held dozens of conversations with potential users, including law enforcement professionals, military veterans and people like Christine Moya, who lives with chronic PTSD stemming from abusive relationships.

?An app like this is needed because there are many in this world who have mental health questions and concerns and may want to remain anonymous but who also want to get answers to their questions,? says Moya, who lives in Denver.

When people download iRel8, they converse via user names, protecting their identities.

But with anonymity underpinning their concept, the co-founders realized they had to proactively address a modern and unfortunate reality common to many social channels: trolls.

At other virtual gathering spots where people share personal thoughts or pieces of their lives, cyber bullies may visit simply to provoke. On health-oriented chats, scammers also may try selling bogus remedies.

?This app is 24/7, available to everybody and only costs a buck a month. It that a value? Yes, it is,? says Croft, who has interviewed and treated U.S. military veterans for combat-related anxiety and substance abuse.

?Of course, there are potential problems monitoring against people who have their own agendas. Now, if you know about those problems in advance and you try to put in safeguards then, yes, it?s a great idea,? Croft says.

Bots that analyze text and sentiments, quickly detecting abusive language, can help weed out potential trolls, the co-creators say. They?ve also provided users the ability to report inappropriate dialogue, which can get violators banned. And they intend to build an ?ignore? function that lets individual users decide what they don?t want to hear ? or who they don?t want to hear from.

What?s more, they say the subscription fee will help ward off trolls, who tend to inhabit free venues.

?We have various levels of policing to keep it a safe place,? Dorchester says.

To make that safe space feel even more welcoming, the co-founders hope their app fuels fundamental changes in some verbiage long used within the mental health realm ? words that may add to the stigma.

Instead of referencing ?mental illness,? for example, the co-founders use ?mental wellness.? They?re also trying out other versions: ?inner wellness? and ?whole wellness.?

?We hope that people talk about things differently,? Gonzales says. ?We want to encourage people to use new words so they can begin to start new conversations.?